Law and Hope are the names of the streets between which St. Augustine High School is located.  More appropriate symbols would be difficult to find as so much of this school speaks of Divine Providence.”

St. Augustine High School was founded in 1951 by the Society of St. Joseph of the Sacred Heart (The Josephite Fathers and Brothers) through the Youth Progress Program of the Archdiocese of New Orleans. The high school has operated from the same location since inception, 2600 A.P. Tureaud (formerly London Avenue). St. Augustine was formally dedicated on Sunday, August 26, 1951—only two days before the Feast of St. Augustine of Hippo after whom the school was named. 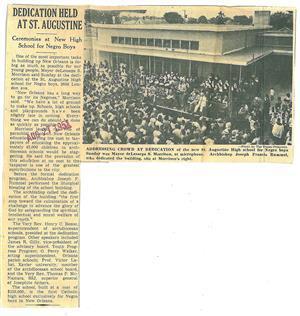 St. Augustine of Hippo was a preeminent Christian and scholar of North Africa and a Father of the Church. He is also known as the Doctor of Grace, and as a result, served as inspiration for the school’s adoption of the motto and philosophy:  Gratia Est Vita (Grace is Life.).  Assigning the Saint’s name to the school was appropriate, as St. Augustine High School was designated for the education of young men from African-American families of New Orleans who would embrace a willingness to grow in wisdom, knowledge, and grace.

With the Josephites leading the charge on the school’s construction, oversight, and administration, St. Augustine was well on its way to making history as a prominent academic institution and driver of civic leadership in New Orleans and the South. 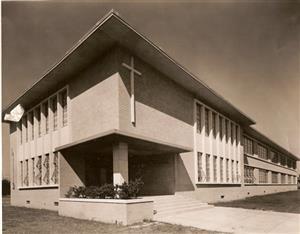 Fr. Matthew J. O’Rourke of The Josephites served as founding principal from 1951-1960.  Under his leadership, the school established legacy standards for excellence in all areas. Those standards included:  promoting values based upon the message of Christ and teachings of the Roman Catholic Church; and developing students’ inherent responsibilities to their families, communities, and nation.

Under Fr. O’Rourke’s leadership, many young teachers were groomed to become master teachers, award-winning extracurricular activities were introduced, and the school and students broke through divisive racial barriers that existed during the post-World War II civil rights era.  In the areas of personal development, students were encouraged to take pride in the school by maintaining cleanliness on school grounds.  Discipline was enforced from school dress code to orderly classroom behavior and a healthy competition was encouraged to reinforce the strive for excellence.

As noted in the historical publication, Between Law and Hope, “The Josephite goal of the development of leadership was incorporated into St. Aug’s statement of its philosophy. Father O’Rourke and staff emphasized academics as a means of preparing future leaders. Empowerment is achieved through knowledge and discipline that comes with study. The intention was to push the students to the limit of their capacity to learn, especially the most gifted.”

Such standards remain the order of the day. The St. Augustine community takes great pride in its founding history and driving philosophy. The school’s far-reaching purpose and successful contributions to youth and society are best understood over time.

As previously noted, securing land and building a facility to educate young men throughout the generations was a priority during the school’s founding years.  In 1943, Rev. Edward V. Casserly, S.S.J. with the St. Joseph Society published an article that mentioned: “a crying need for a high school for colored boys” in New Orleans. Shortly, thereafter, the Archdiocese of New Orleans announced its intent to open a Catholic high school for African American males through the Youth Progress Program. 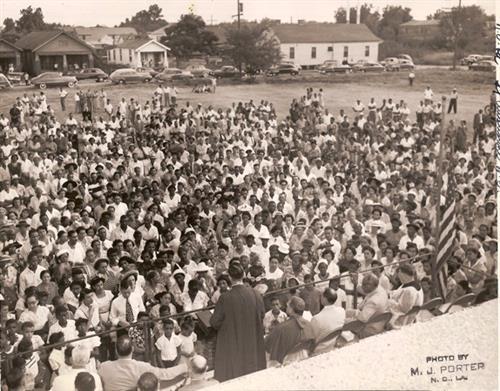 During the 1950s and 1960s, St. Augustine witnessed breakthrough success as students and alumni accomplished many “firsts” for African-Americans in the state, region, and nation. Momentum grew as the school positioned itself as a Christ-centered institution of academic and athletic excellence while battling the remnants of segregation.  Athletically, the school rose to champion status in the Louisiana Interscholastic Athletic and Literary Organization (L.I.A.L.O.), which was the athletic league for Black student athletes in Louisiana. Between 1963-1966, St. Augustine won three state championships and one district championship in L.I.A.L.O. The school would go on to accomplish more victories in this arena.

In 1967, St. Augustine won a legal battle, which led to the desegregation of Louisiana high school sports as well as the school’s admittance into the Louisiana High School Athletic Association. The same year, the school’s legendary Marching 100 became the first African American marching band to participate in the Rex Mardi Grad parade. Within this period, St. Augustine presented its first graduating class in 1955, and early alumni began to blaze trails in collegiate atmospheres where African- Americans were once excluded.

Expansion and dominance defined St. Augustine during the 1970s.  The first physical expansion of the school took place in 1971 with the addition of a wing to accommodate new science laboratories, a gymnasium, and athletic complex as well as a music complex.  Athletically, the school won three football state championships between 1971 – 1979, becoming the first African American High school football team to compete and win in the highest LHSAA classification level at the time of competition.

By the 1980s and 1990s, St. Augustine saw its impact in the City of New Orleans and beyond.  In 1986, Sidney Barthelemy (Class of 1960) was elected the second African-American mayor of the city of New Orleans where he served two terms in office.  Undoubtedly, Barthelemy was one of a growing list of notable St. Augustine alumni ascending to elected office.  In 1987, the Marching 100 played for Pope John Paul II during his visit to New Orleans.  That year, Fr. O’Rourke became the first President of St. Augustine, serving as the school’s lead ambassador on community and fundraising affairs.  As leadership focused on the future of the school, strategic plans were developed between 1997—1998 to guide the school’s development into the new year.

With the turn of the century and entrance of the new millennium, St. Augustine met milestones and challenges.  In 2001, the school celebrated its 50th anniversary with a mass held at St. Louis Cathedral.  The founding principal, Fr. O’Rourke gave the homily.  In 2002, the Marching 100 participated in the Tournaments of Roses Parade, again using its musical platform to bring favorable attention to the school and city of New Orleans. The following year, Between Law and Hope, a historical publication compiled by Fr. O’Rourke was released.

Plans to serve more students began to unfold when the St. Augustine Academy for students in grades 7-9 opened in 2005.  The school also opened the Warren and Hilda Donald Business and Technology Center.  Equipped with state-of-the-art technology, this facility ensures that St. Augustine students will remain competitive in a technology-driven society.  The new advances were met with challenges that required faith and resilience to overcome. 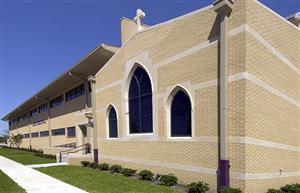 Today, while St. Augustine now welcomes students of any national or ethnic background, it remains the leading secondary school for black males in Louisiana and is nationally recognized in educational circles for outstanding success in preparing its students for higher education.