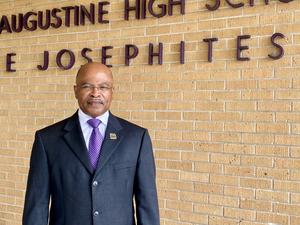 “Mr. Johnson is a talented and award-winning band instructor and leader who will continue the great St. Augustine music tradition,” said Gerald DeBose 76, principal of St. Augustine High School. "He brings a depth of experience to our programs and he has a passion for music education that will guide him as he leads the program.”

Johnson served as assistant band director at St. Augustine under the tutelage and leadership of the late legendary Band Director Edwin Harrell Hampton.

“I am thrilled to return home to St. Augustine and to be a part of continuing the tradition of excellence on the field, in the concert hall, and in the classroom,” Mr. Johnson said. “I am proud to carry on the amazing work of my mentor Mr. Edwin Harrell Hampton and I am especially excited to work with the outstanding young men on this campus."

Johnson is a former drum major and 1981 graduate of St. Augustine High School. After joining Southeastern Louisiana University’s band in 1981, Johnson made history by becoming the university's first African American drum major leading the band from 1983 to 1985.

Johnson is a member of the Council of Greater New Orleans Marching Band Directors and the District VI Band Director’s Association. He is also a proud member of the Association of St. Augustine Alumni – New Orleans Chapter. Johnson serves The Edwin Harrell Hampton Foundation as assistant director and program coordinator. He is a member of Phi Mu Alpha Professional Music Fraternity and Alpha Phi Alpha Fraternity Incorporated.

About St. Augustine High School Music Programs
Each year St. Augustine High School’s internationally acclaimed music program draws talented students from all around the Greater New Orleans area. This unique program brings students directly into the life of New Orleans’ professional music community, allowing them to study in a disciplined environment while receiving a standard of artistic and academic training unique at the secondary school level. Graduates of the program go on to study at some of the world’s best colleges and conservatories.